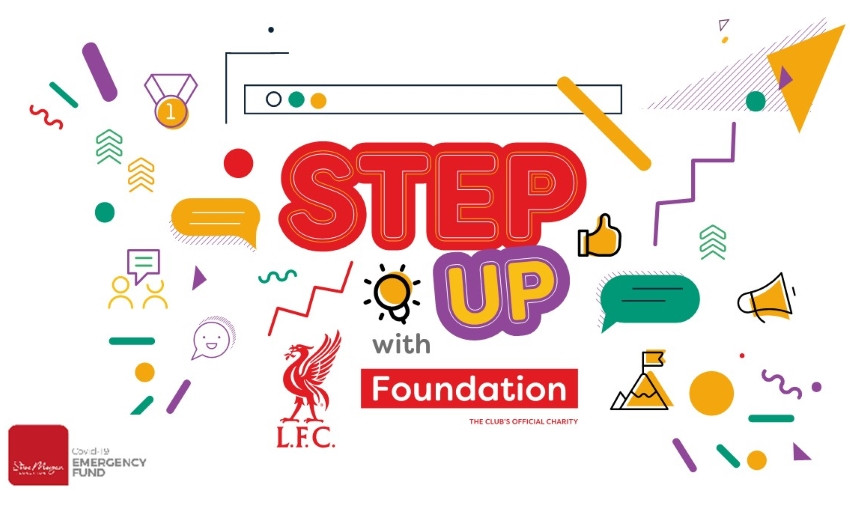 The STEP-UP  programme focuses on the KEY life skills associated with a smooth transition to secondary school such as self-esteem, resilience, Goal setting, motivation etc.

These lessons are delivered virtually over Zoom by the LFC Foundation team with lessons will running twice a week. All families will have to do is register through the LFC portal and attend each lesson.

Lesson one (self-Esteem) will start on the Tuesday 29th July at 13:00 and will run every Tuesday and Thursday till the 27th August at 13:00.

Follow the link to resources, worksheets and information: https://padlet.com/lfcplps/p989b7tk3qgv2s65 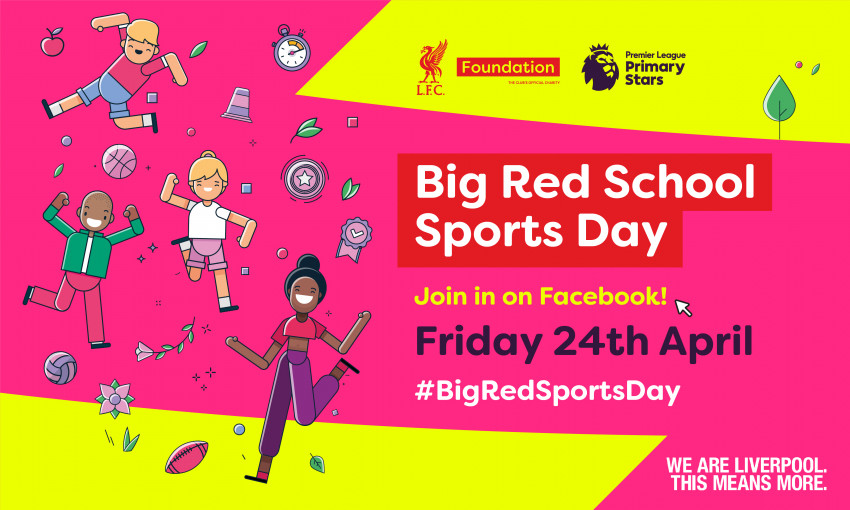 At 9:30 the LFC Foundation and the PL Primary Stars team will be hosting our very first online Big Red School Sports Day.

The day will be a mix of fun activities for kids and families to do at home. After each activity the pupil will have the opportunity to self assess their own performance and track the progress using the form attached.

Its basically a school sports day done at home via social media. We will be using both Twitter and Facebook for this and the activities involved use household objects. So its pretty much accessible to all.

There is also a downloadable Certificate for the kids and we may have a few special guest getting involved.

There's fun and games for all the family every week with Open Goals, and you can find us in 9 different park locations in the Liverpool City Region.

I have attached a link for some further information https://foundation.liverpoolfc.com/get-involved/open-goals
Jeffrey Humble FC now host our own SSE Wildcat Centre

Price: Free throughout May, £3pp from June

News - LFC Foundation is back!
For the 18/19 season, the LFC Foundation coaches will be running 18 PL Kicks Football sessions every weekday evening, for 8 – 19-year olds in 9 locations across the Liverpool City Region.
It’s a great opportunity for your children to keep active, play sports and make new friends.
Please download the weekly timetable below to find out more.
Liverpool vs Bournemouth at Anfield Stadium

The children had a great afternoon with Miss McNally and Mr Chalmers at Anfield!
Liverpool beat Bournemouth 2-1
Friendly against Bishop Eton
Another great game for the boys today...an end result of 11-10!
Anfield Mini League with Year 5 boys
A great result from our Year 5 team today who played two games. 1-1 against the first school and 3-1 against the second school. Well done boys!
Anfield Mini League
A huge well done to our Year 5 Mini League team who started the season off with a fantastic win! 10 goals scored between them - amazing result boys!
Liverpool vs Newcastle Game
Year 4 Primary Olympics at SJB

Wow! What a morning some of our Year 4 children had. We competed against 6 schools in the Primary Olympics at St John Bosco and we came away with the trophy!
14 children competed in 9 different sports and we won 7 gold medals and 1 bronze leaving us as the overall winners. A big well done to all children who came along, we are very proud of your talent and sportsmanship.
KS1 Dance Competition
A fantastic morning watching our KS1 children showcase their dances from around the world. Every child put 100% into their routines and a big well done to Miss Rush's class who were voted the winners by our judges; Year 3 pupils.
Bikeability
A big well done to lots of our Year 5 pupils who completed their level 1, 2 and 3 with the Bike Right Bikeability team!
Dance Workshop at Leamington
KS2 Intra School Dance Competition

All classes performed exceptionally well to a song from a well known musical. What a great morning spent watching some amazing talent. A big well done to you all!
After lots of deliberation, Class 5E walked away the winners and runners up were class 4F!

Some of our children in Year 4 and 5 took part in the High School Musical performance at SJB. Their dancing and acting skills were amazing!
Anfield Mini League
A big well done to our Year 4 books for winning both games against 2 different schools. A great start to the league!
SJB Dance Festival

Well done to all the dancers for taking part in the St John Bosco Primary Dance Festival. They performed an amazing routine based on anti bullying and have all worked extremely hard.
25 metres!
A big well done to some of our Year 4 pupils who have already completed the 25 metres in swimming and gained their certificate!
KS1 Dance Competition
The children in KS1 performed dances from various musicals. All performances were fantastic but we could only have one winner and that was Class 2P!!
A big well done to everyone - What a great morning full of music and dancing.
Swimming
Congratulations to those children in Year 6 who completed the 25 meter swim during their top up lessons!

2018
Year 3 win the league!
Amazing result today from 6 of our Year 3 boys who won their legue at Anfield Sports Centre! They played against three other schools and came first place scoring a outstanding 20 goals in total and winning all 6 games.
Jospeh from our team also got 'player of the tournament' due to excellent sportmanship - well done Joseph!
We celebrated with a nice cool ice-lolly in the sunshine!

Year 3 and 4 Highland Games
A big well done to 8 of our year 3 and 4 children who took part in the Highland Games competition at North Liverpool Acamady. They came 1st place out of 20 other schools with an amazing 504 points!
We are very proud of you all :)
Intra School Dance Competition at SJB

Every class in KS2 have been practising all term to compete against each in the Intra School Dance Competition which was held at St John Bosco Arts College. The theme this year was 'Dancing Through the Decades' and every year group performed extremely well. It was a tough competition but Year 5JE came out as the winners!
A big well done to all the children for taking part and thank you to all the parents who came along to cheer the children on.
Bikeability with Year 5
Well done for completing the bikeability training

Monday Mornings in Early Bird Club are all about being active!

It’s great! I love sports and Monday Early Birds gets you ready for the rest of the week.

I enjoy it because we do stuff on Premier League and I love football. Feel better going to class because I have already done sports.

I love Mondays in Early Birds because we get to exercise and we used to play on Ipads. I feel ready to learn when I get to class.

A big well done to our Gifted and Talented dance group who came 1st place at the SJB Primary Dance Festival 2017!! Our theme this year was 'the calm after the storm' based on the storms that have destroyed parts of the world over this past year. All of the dancers worked extremely hard and we are very proud of their achievment.
Year 6 at the Anfield Mini League
We played two games in the mini league this week and won both of them
2 - 0 and 4 -1.
Our meet and greet with the Olympic Gymnast Beth Tweddle
Our aspiring gymnasts had lots of great questions for Beth about her very successful career in gymnastics. Our children felt inspired by the stories Beth shared with us from discussing her favourite skill to perform to how she overcome injuries throughout her career. We would like to thank Beth for taking the time to come in and meet our pupils at St Matthew's.
I loved meeting Beth! She told us all about her life as a gymnast and I got to find out about her favourite apparatus to perform on in the Olympics.

Meeting Beth Tweedle was amazing! I got to ask her loads of questions about how she became so good at gymnastics.

Sports Day 2017
"We took part in 24 different activities during Sports day, each of them showing off something that we have learnt this year. It was loads of fun.  And the weather was great too!"
Year 4 win the league!
Year 4 boys won their league at LFC Academy and have been invited to take part in the regional finals next month. Good luck boys!
Year 4 Girls Football
Year 4 girls took part in a tournament at North Liverpool Academy.
Gold medalist!
Aliyah won a gymnastics competition at Gymfest in Glasgow this weekend. Another superstar at St. Matthew's.
Year 4 are Champions!
Some of our Year 4 boys won the league with their Sunday team and brought the trophy in to show everyone! Well done boys, we are very proud of you.
Highland Games
"Some of us were picked to take part in the Highland Games at Calderstones High School. We had to do lots of running, jumping and throwing and it was loads of fun. We came a close second overall."
Year 5 step up to Year 6 League
"It was tough playing against the Year 6's but it was good practice if we get to play in the team next year."
KS2 Dance Competition at St John Bosco
This term the whole of Key Stage 2 have been training for an dance competition at St John Bosco. Each class choreographed their own routine and practiced really hard. 4F came out winners with their own version of the New Zealand warrior dance 'The Haka.'
Year 5 EFC School's Tournament
Year 5 took part in the EFC School's Tournament at Fazakerley High School. They played really well and finished 4th in the league.
St Matthew's B Play at the Anfield Mini League
"This was the first time we had played at the Anfield Mini League. We didn't win this time but we did have lots of fun."
Year 5 and 6 at EFC Premier League Tournament
"It was great to go out and play football all day. We had 8 games altogether and didn't get beat until the semi finals. Hopefully next time we can go one step further."
Under 11's at the Anfield Mini League
"This week we played two games the first one we drew 1-1. But we won the second one 3-1. We are turning into a really food team."
Tag Rugby
"I love it when we learn tag rugby. I think I have really improved since last year and I understand the rules a lot more."
Level 1 Basketball Competition
"Having a competition at the end of half term was a great idea. We got to show off all the skills that we had learnt and also it was great playing in a team with our friends."
Capoeira in Sports Week
"I didn't know what Capoeira was before today. It comes from Brazil and it is like a mix between dance and martial arts."
Golf in Sports Week
"We played golf in school today. Sir turned the front yard into a golf course for us. It was hard at first but I was really good at it by then end?"
Lacrosse in Sports Week
"Lacrosse is the most difficult sport that I have tried so far. The coach taught us the best way to hold the stick, throw and catch the ball."
LFC coaches teach Year 1
"I like it when the Liverpool coaches come in. It makes me feel like I'm in a proper team."
Girls Football
"This was the first time some of us had ever played in a football team. We lost the first couple of games but then we improved and won the last two. We can't wait to go again."